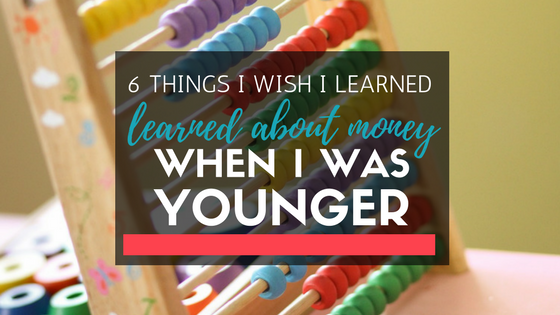 I’ve spent the last few years making up for the financial mistakes that I made during the first twenty-something years of my life. Like many, I bought into the idea that money (and things) could make me happy but I faced a harsh reality when this wasn’t the case. Even though I realize that I can’t go back in time and have a do-over (how cool would that be though), I can at least imagine, right?

Well without wasting any more time on the build-up, I give to you – The 6 Things that I wish I learned about money when I was younger.

The Emotional Connection to Money

Forgive me for being Captain Obvious here, but we call it Personal Finance because it really is all about US.  Just think about all of the things that we consider ‘Personal’. For some, it could be age or weight while for others, it may be relationship status or religion.

The underlying point with all of this is: the things that we consider ‘Personal’ are very closely intertwined to our emotional well-being – maybe more than we actually think.

Growing up, I never really tied emotion to money. I always knew that money satisfied basic necessities and provided for some frivolous wants; but the realization that fear, anger and guilt could be part of the equation, never occurred to me.

It wasn’t until I had some life lessons where I experienced the fear that comes from loss of income and the guilt of improperly managing money that I was able to understand how my money habits were dictated more by the underlying emotional urges than anything else.

The Consequences of Credit Card Debt

I remember it like it was yesterday – my first day on campus in college. After finishing Freshman Orientation we were taken on a campus tour led by our student ambassadors. We passed the library, saw the football stadium and finally headed toward the University Center where many of us would begin the downward trajectory toward financial disaster.

You see, inside of that University Center were people that were giving us things for FREE! Well, sort of free…I mean, all we had to do was sign their credit card application. But after that, we got a FREE T-SHIRT!!! And not just one t-shirt, we were able to get a free one for each application we filled out. Talk about WINNING! I probably left with a weeks’ worth of shirts on that first day.

To this day, those were the most expensive shirts I have ever worn!

Unfortunately, I made the mistake that many young adults make starting out and underestimated the negative effects of credit cards. In my situation, I was only looking to get free t-shirts and had confidence that no logical bank would approve an 18 year old with no job for a credit card – let alone three.

Those three cards led to a few thousand dollars of debt and years of digging out of a self-imposed financial hole.

The Benefits of Being Frugal

Let me just start off by saying that living a life of frugality often gets a bad rap. Besides the people that actually live a frugal lifestyle and are familiar with the benefits, most people think that when you decide to be more cautious with your spending, you are in some way depriving yourself of living a full and enjoyable life.

Websites like Frugal Rules, Club Thrifty and the Frugalennial (in case you’re wondering – yes…that was a shameless plug) are working to debunk this myth and prove that you don’t have to spend your way into debt to have a fulfilling life.

Since making the decision to be more prudent about my finances, I have found that there is more freedom in that than anything I was doing before. In addition to the monetary benefits of being frugal, I have found that I’m less stressed, have more genuine relationships and am overall happier than I was spending haphazardly.

When you’re young, let’s face it – you’re dumb. (I’m sure half of you are nodding in agreement while the other half has already hit the ‘X’ on their browser) For those of you on the fence, wait…let me rephrase. When I was young, I was dumb. You? I’m sure you were a genius and have the ribbons to prove it. See…that was better, right?

For those of us that did make dumb decisions in our youth, it’s easy to look back on a big purchase that you quickly fell out of love with or maybe a debt that you wish you would not have incurred and think, “Man, I wasted my money on THAT??” What’s harder to recognize and what few people even give thought to; is the money that you’re losing not because of an action that you’ve taken, but rather, inaction.

I’m sure that I heard the phrase ‘Compound Interest’ when I was younger but it wasn’t even on my radar until I had squandered many years of precious potential earnings. At its simplest, Compound Interest occurs when the interest that you earn on an amount of money begins to grow interest itself.

I’ll give an example that drove the point home for me (from Dave Ramsey):

When both Ben and Arthur turned 65, they decided to compare their investment accounts. Who do you think had more? Ben, with his total of $16,000 invested over eight years, or Arthur, who invested $78,000 over 39 years?

For you visual folks out there – take a look at this: 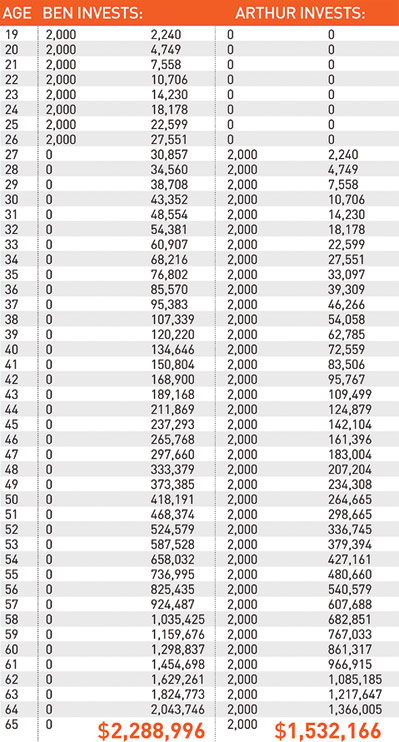 The monotony of life can sometimes fool you into believing that everything is running fine on autopilot. That is, until the theoretical bottom falls out. Chances are – we’ve all experienced some type of financial misfortune due to car repairs, medical expenses or loss of income at one point or another. The way that we view these situations is often directly related to how financially prepared we are.

The way that you view a $400 bill to replace your car’s alternator is a lot different when you have an emergency fund than when you live paycheck-to-paycheck with little room to spare. Having been on both sides of the equation, I know this to be true firsthand.

Generally, when we think about investing in ourselves, higher education is the first thing that comes to mind. From my perspective, education is a lifelong process that doesn’t necessarily have to involve a university classroom – or the debt that’s typically associated with it.

Any interest that you could possibly think of is just a Google search away. In addition, resources like Khan Academy and Lynda.com allow inexpensive (and in some cases free) courses in everything from Web Development and Photography to Art and Science.

“You are your most important asset, invest in yourself.” – Les Brown

Is there anything that you wish you would’ve learned at an early age to put you on the right track financially? Let’s talk about it. Join the conversation!